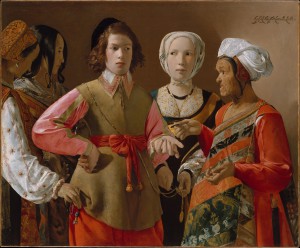 George de La Tour was born in Vic-sur-Seille, Lorraine in the family of a baker. His mother might have been from the noble family. However, it is hard to say for sure as La Tour «was by far the greatest but also the most enigmatic of the French realist painters» (Brigstocke 1). His education remains unclear. Some scholars suppose he studied in Italy because of his Caravaggesque manners. Just like the great Italian master, La Tour «used humble figures in his religious works, genre scenes, and dramatic chiaroscuro» (Brigstocke 1). Only two of the patrons who commissioned the artworks of the artist are known. They were Duke of Lorraine and Louis XIII. «The patron of the painter Bellange was burned as a sorcerer, and a little later the favorite of Duke Henry II was also condemned. La Tour must have known these famous trials and he must have seen countrywomen with the gift of healing convicted of witchcraft and led to the stake» (Pariset 204). Most likely, the fact that La Tour witnessed these events was the reason he chose the fortune telling as a subject for one of his few artworks. La Tour’s paintings are precious as only «less than forty [of them] survive from his hand» (Wright 3). Those artworks that we can find nowadays are divided into two groups according to the time of the day. Daylight paintings portray casual scenes in great detail with a variety of colors; night scenes are almost invariably illuminated by candlelight. The artist depicts his characters paying great attention to their inner world, primarily showing their personality. Despite his paintings are elevated in spirit, some interesting facts suggest that La Tour was an odious person. «By twentieth-century standards he seems to have been bad-tempered and unpleasant. He was fined for leaving rubbish in front of his house» (Wright 4). «In 1646, the exasperated inhabitants of the town were driven to write a petition to the administration at Nancy listing La Tour’s crimes» (Wright 5). Nevertheless, what would the admirers of the painter not forgive for his unique and original paintings?