It was a hot but cloudy day in September when I decided that I want to start using film cameras to shoot. Digital cameras are great, but when you know you only get a limited amount of films in the camera, you will start to treat every shot as if it were the last picture you could take. Some say the emotions of people are shown better through films. While that remains controversial, one thing is certain; you treasure the opportunity of taking each photo more. Apart from purchasing new models, I also wanted to start collecting some of those old models to experience the feeling of using a camera older than myself and wonder what story it contains.

I headed to David Chan Co. Photography enthusiasts in Hong Kong. Some will find this name very familiar, for he practically owns the film camera heaven in Hong Kong. Hidden inside one of the most notorious building, David Chan Co. nests in a tiny property on the first floor. The owner David Chan has been working in the camera industry for more than fifty years. With the vast collection of cameras he got, Mr. Chan has lent out his collections multiple times for exhibitions use and shooting movies. The windows of the store are filled with shelves of vintage or second-hand cameras. There are so many of them that you cannot see what is going on inside the store. When you step inside the small shop, you realize there are way more cameras than the ones you have seen outside. From Rolleiflex to cameras with hoods… Even the air inside smells like decades ago.

David Chan just came back from yum cha (a traditional meal in Hong Kong involving tea and dim sum, eaten between breakfast to lunch time), and started picking out cameras for me after hearing what I wanted. He was careful with all his cameras and knew exactly where to find a specific one he was searching. That was very impressive considering he is already in his seventies, but at the same time, it should be an easy task since he has been running this store for more than 40 years. All cameras have a plastic cover on them, and everything looked clean and neat. That day, there were three people managing the store. Everyone was very nice, patient and eager to answer questions.

“You don’t have to buy the more expensive model. This one will be more than enough for you to learn how to use it well,” Mr. Chan told me while I was indecisive among the various cameras he brought to me, “they are of the same quality anyway.”

After a couple more minutes of struggling, I finally decided on the ones I wanted to purchase. Mr. Chan seemed very pleased to see that there are young people wanting to use the conventional film cameras. He quickly walked to a pile of new books and took out some copies for me and insisted on me taking those beautiful photography books as a reference.

“People are living the good life now filled with the events, which is quite convenient but too fast… You know decades ago we had to walk all the way from mainland China to Hong Kong to settle down… And we had to try our best to find a job for a living.” Mr. Chan started being nostalgic just like many other elderlies.

“Nobody wants to listen to your old story.” One of his colleagues teased him as she was cleaning the cameras I just viewed and putting new covers around them.

“I have to tell them. They need to know about the history, and remember how people lived in the past!” Mr. Chan insisted.

Mr. Chan demonstrated to me multiple times how to use each of the cameras and carefully noted down my contact info in his giant notebook. He also insisted on giving me some films.

“You will find out the difference of taking pictures with a film camera and with a digital camera, it is completely different, it is full of emotions.” Mr. Chan said slowly but in a very certain way,

“When you have time, be sure to come back and show me some of the photos you take, I would love to see them.” He was still telling me something while I walked out of the tiny camera store, being careful not to break or knock over the antique cameras on my way.

Happiness, sadness, excitement, anger, nostalgia. For people who love film cameras, these emotions expressed by those carefully taken photos are the reason of their passion and why they remained loyal to film. For David Chan, that is probably the reason to continue working in this industry, even if the environment surrounding his store transforms from the old high-end landmark to a notorious building for unspeakable activities; even if fewer people pay attention to the film camera industry nowadays. He is still there, guarding his collections, and waiting to serve those who come to his treasure island on the adventure. 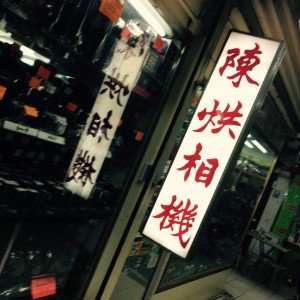 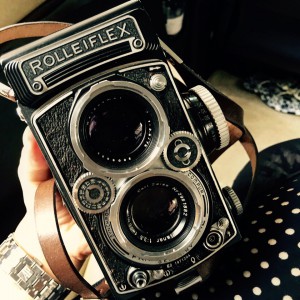 The metamorphose of your life: Take time to meditate — and by this, I do not mean sit down on your yoga mat. Stop. Stop doing what you are doing. Stop thinking. Just watch, listen and observe. Sometimes you do not even have to go so far as to look inside yourself, by closing your eyes and trying to keep your mind silent. Looking at everything around you without categorizing it is already enough. If you struggle to fix the moment, buy a film camera — it will quickly remind you what life is all about.